Inhabitants of the forest or alpine meadows (according to the burgundian etymology (maning-gald or from the celtic (maning-aulp). Maningot became the fief of the lords of Chevron de Vilette at the start of the 11th century, a powerful and religious family from the Tarentaise valley.
1600 souls peopled the ‘chapel of Maningot’ in 1567, according to the most ancient of known records.
A stone with an engraved cross was erected in honour of Saint Francois de Sales during his pastoral visit of 1607, left the name to the col de la Croix Fry (crux ferit). The spring at Montperraz has posessed ‘miraculous virtues’  since the saint bishop refreshed himself there, and at Sous l’Aiguille, the saddle of Saint Francois keeps the imprint.
The black death of 1631 killed a quarter of the inhabitants.

The church was rebuilt around 1687, in a baroc style, according to the dogma of the catholic church. Of that building there remains the entrance gate as well as the hall area. Under the patronage of Saint-Peter, the titular saint is Saint Christopher of Lycia in accordance with a request by the priest father Chappaz in 1731.

In 1766 the commune is enfranchised by the purchase of feudal charges.
Monseigneur Rendu writes in 1843 that  the church makes a pleasant appearance in its entirety, but is somewhat too small for the 2000 parishoners.  14 living priests come from Manigod, of whom the canon Veyrat-Charvillon, professor of theology at the grand seminary at Annecy.

Savoy has known several French occupations, and was integrated into France in 1860 by referendum.
The presbytery was rebuilt in 1874-75 by the business man J Curgo who then took ownership of it.
The englargement of the church was done in 1886-88. The clock tower was rebuilt and moved.

Agriculture, essential activity, has fed the population which grew consistantly and for a long time up until the 19th century, then the rural exodus caused a decline in the population, despite the development of forestry activities (7 sawmills exited still in 1881) on the small mountain streams.
However, the agricultural activity remained important and Manigod was the centre of the first sheep fair in the canton in 1979.

On the 9th March 1943 the committee for the Resistance was created in Manigod. P Bozon-Laydier was the chief. They decided to train the young rebels into a disciplined and organised group.  A model to his peers he was chosen by the secret army, in december 1943 to create an officers school. Lieutenant Joubert took charge of it, the heads of the camp were trained to structure the resistance fighters at the fight of the Glieres Plateau.
The road of the col de la Croix-Fry became accessible to cars at the beginning of the 1950’s In 1969, the ski resort of the Croix-Fry took off, followed in 1971 by that of the col de Merdassier.
In  January 1979, the French bobsleigh championships are a success with 3500m of track from the Plan Bois following the road of the ‘Envers’. They were followed in february by a Parets Grand Prix (small traditional wooden sledge) on the frozen slopes at the Plan des Berthats.

From 1993, the Manigod Paret championships have given fresh impetus to this popular activity. 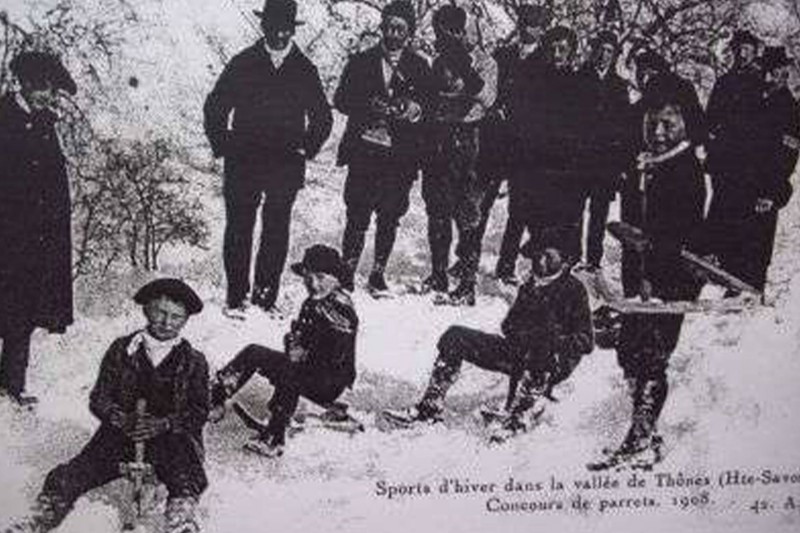